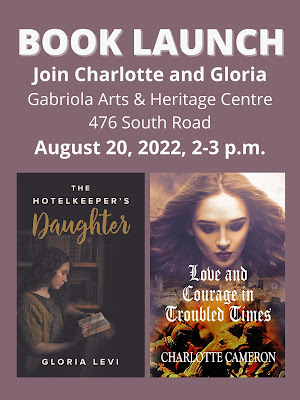 Charlotte Cameron and Gloria Levi are launching their newest books together at the Gabriola Arts & Heritage Centre on August 20, from 2 to 3 p.m.

The Hotelkeeper’s Daughter, Levi’s fictionalized memoir spanning the period from the late Depression to 1948, is a moving account of Levi’s childhood in an Orthodox Jewish community in Brooklyn, New York, and her disrupted life as the “hotelkeeper’s daughter” in a series of Catskills and New Jersey hotels rented seasonally and later bought by her entrepreneurial mother to pull the family out of poverty. This coming-of-age story is told from two perspectives: through the eyes of Gilda, the youngest in her family, who clashes with her mother, and through the eyes of the author on Gabriola as she reflects on the life lessons she has learned over her nine decades.

Cameron’s contemporary coming-of-age novel, Love and Courage in Troubled Times, tackles the persecution of the Cathars in 13th century France from the perspective of a Vancouver teen. When she is forced to accompany her family to a Cathar village in the South of France so her father can finish his book on the Cathars, she starts seeing flashes of the tragic events that happened centuries earlier and gets caught up in a series of adventures that remind us that troubled times are always with us.

Join Cameron and Levi at what is sure to be a lively and engaging event.
at 3:38:00 PM No comments:

Celebrate Gabriola authors at the Museum! 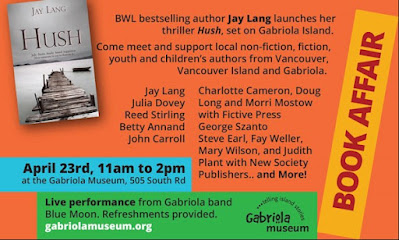 An outdoor bash with lots of local Gabriola authors and publishers at the Gabriola Museum. Music and food. Should be fun. Hope you'll join us!