A Family's Poignant Journey to Integrate into Israeli Society 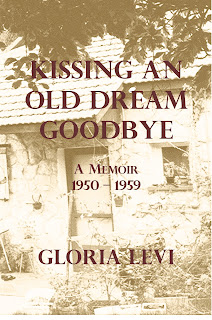 When Gloria Levi is 19, she travels to the new State of Israel—and her life changes forever. What was supposed to be a summer trip between university semesters turns into an enduring love affair with the man she meets onboard the ship to Israel, and with the land of Israel itself. Told through the eyes of a young woman and mother, her memoir recounts the painful and poignant journey of a young family trying to integrate into Israeli society in the 1950s and her realization that her path to Israeli identity is both complex and multilayered.

“A riveting read from beginning to end. The story of a remarkable woman whose life intersected with a critical time in Jewish history. Levi captures the struggles of a young woman striving for personal identity and family balance, with the backdrop of a similarly young country striving to find its identity. She writes with insight, humour, honesty and passion, in a book you won’t be able to put down.” — Mark L. Winston is a Professor and Senior Fellow at Simon Fraser University’s Morris J. Wosk Centre for Dialogue, and author of the 2015 Governor General’s Nonfiction Literary Award for Bee Time: Lessons From the Hive.

“In contrast to the better known narratives of the refugee Aliya and the Middle East in the first decade of the State of Israel, this is the seldom told story of a young Anglo family, impelled to immigrate to the newly born state by Zionist idealism, hope and a sense of adventure. The exhilaration of realizing their dream is soon mixed with the pettiness, doubt and drudgery of daily life in the new state, followed by their heartbreaking resignation. A captivating personal story in all its detail and complexity.” — Rahel Halabe is an eminent Arabic/Hebrew translator in Israel, a gifted Hebrew teacher and author of the two volume innovative textbook, Hinei, an Introduction to Biblical Hebrew.

“A heartfelt journey where young idealism encounters the real struggles of young immigrants to the newly formed State of Israel. Levi’s experience as a pioneer in Israel during those early years foreshadowed the complex challenges that would grow for the young country as it became more established. She leaves the reader smelling and feeling the land of Israel from the 1950s, with all its brilliance and troubles.” — Rabbi Yonatan Gordis is a partner at ChangeCraft, a consulting firm specializing in change processes in the philanthropic and non-profit fields, and a director of Sh'ma Now.
〰〰〰