A COMING-OF-AGE NOVEL FOR READERS 10 AND UP 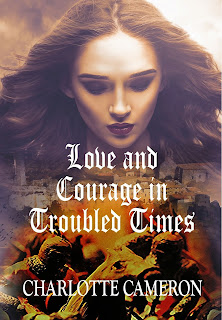 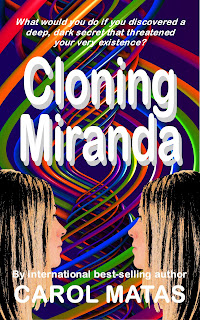 START READING IT NOW!
Fourteen-year-old Miranda has it all: beauty, brains, talent, perfect health. Until the day her vision goes blurry – the first symptom of a fatal disease. As she and her parents fight to save her, she makes the shocking discovery that everything she thought she knew about her life is a lie.

Suddenly Miranda is facing some troubling questions: What makes us human? Is it our DNA, our upbringing or the choices we make? The answers will force Miranda to deal with the biggest challenges of her life.

"Suspenseful YA novel … taut story, which features girl-power heroines confronting bad guys and the nature of the self. … Hitchcock-ian fun, full of deep questions to ponder.”— Kirkus Reviews

"A suspense-filled mystery that starts off with exploring Miranda’s middle school life, then morphs into a science fiction bombshell!”— Erika Lewis, TV producer/writer and author of Game Of Shadows, Tor Books

“Full of twists and turns that will leave you guessing and gasping until the end!” — Eric Walters, award-winning author of over 100 books for children

“A carefully crafted and suspenseful tale, as thought provoking, as it is engaging.”— Perry Nodelman, children’s book author and recipient of the 2015 International Brothers Grimm Award for research in children’s literature 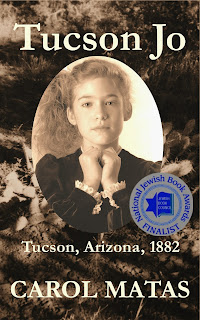 "A fast-paced tale filled with both exciting action and deep moral quandaries, all driven by the likeable young 'Tucson Jo.' " Chava Lansky, Jewish Book Council
A BEST BOOK FOR KIDS & TEENS
(The Canadian Children's Book Centre's Best Books for Kids & Teens 2015, Spring Edition)
2015 McNally Robinson Book for Young People Awards Finalist
"Recommended" by CM: Canadian Review of Materials
No. 1 on Ezvid Wiki's "Englaging Works of Middle Grade Historical Fiction"
"This fast-paced story has plenty of action.
The language is fitting for the historical era...Jo is a likable charaacter and her fearless attitude is inspiring...The women’s rights issue delivers a strong message and would make for great discussions in the classroom." Louise Sidley, Resource Links, Dec. 2014
“Papa is a tyrant; that’s what he is — a tyrant! And I will always be subject to his whims!”

When her father decides to run for mayor of Tucson in 1882, fourteen-year-old Josephine Fiedler is reluctant to support his bid. “I could be sealing my fate, helping to elect someone who wants nothing more than my docility.” With a mind of her own, Jo is in constant conflict with her father and doesn’t know how to back down when she feels she is in the right. “Without law, without order, there is no freedom,” states her father, but Jo wants nothing less than the freedom he promised her when he uprooted the family from “civilized” Boston to the Wild West of the Territory of Arizona because of his health. When violence erupts during the election campaign and her father’s opponent attacks him for being an Israelite, Jo has to reconsider her position and even what it means to be a Jew.

Inspired by Tucson’s first Jewish mayor, Tucson Jo is packed with action and deeds of derring-do, shootouts and holdups, while dealing with serious moral issues like right and wrong, law and order, and women’s rights.

TRADE PAPERBACK EDITION
154 pages
Paperback: 15.24 cm wide x 22.86 cm tall (6" x 9")
TUCSON JO IN YOUR FAVOURITE E-BOOK FORMAT
$8.99 USD
TUCSON JO IN THE KINDLE EDITION: $8.99 USD
Praise for Tucson Jo
INCANDESCENT AND AWARE STORYTELLING
"Rich with historical details, this wonderful novel delivers a fast-paced story sure to appeal to teens who love to transport themselves to a time long ago in a faraway place. The characters are so perfectly drawn that readers will find it easy to climb inside their skins. To their amazement, they will probably discover that people haven't changed much in the last hundred and thirty years.
Young people who are struggling to find their own places in the world and wondering how to overcome issues they are having with their parents may find much comfort and insight in Josephine's and Connie's methods of dealing with their own family problems. The challenges of youth and the wisdom of age are beautifully handled in this exciting story, which is sure to become a favorite of many young readers. I hope it will find its way beneath many Christmas trees and onto countless library shelves, because it deserves to be applauded, savored, and enjoyed." — Elle Maxwell, author of 24-Carat Murder (A Mack Dearling Mystery)

The Story Behind the Story
Carol Matas reveals the story behind Tucson Jo. She also discusses the moral issues raised in her middle-grades historical novel, issues that are just as relevant and important today. A fascinasting and wide-ranging interview with Tucson Tales, a children's literature publication showcasing new and established writers.

Get the inside scoop, the story behind the story of Tucson Jo, with these fascinating interviews with Carol Matas:
Book Q&As with Deborah Kalb
Jewish Books for Kids with author/blogger Barbara Bietz
The Whole Megillah by author/historian Barbara Krasner
𐩘
A MEDITATION ON THE CIRCLE OF LIFE
A Way for Children to Think about Death 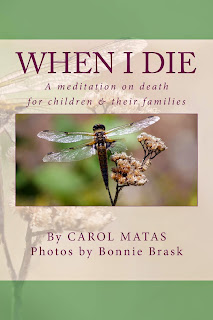 START READING IT NOW!
Are you looking for a way to talk about death to your child or grandchild? Are you grappling with the issue of your own mortality? When I Die, a meditation on death, can give you a safe place to start the discussion.
Carol Matas is an award-winning author of  more than 45 books for children and young adults. When I Die is sure to resonate with parents and children of all ages.
CLICK HERE TO ORDER YOUR PRINT COPY TODAY. AVAILABLE ONLINE ONLY.
34 pages, full colour, trade paperback, 6" x 9" $9.99 USD
CLICK TO ORDER A KINDLE COPY: $4.99 USD
CLICK HERE TO ORDER WHEN I DIE IN EPUB AND OTHER EBOOK FORMATS. ($4.99 USD):
NOTE TO eREADERS: For optimal e-viewing, set the text on your eReader small enough that you see text above and below each photograph.
Carol Matas explains how she came to write When I Die
"The entire manuscript came to me all at once while I was meditating. I have changed it a little but it is almost exactly as I 'heard' it originally. I wasn’t thinking about anything in particular, my mind was rather blank, so I can’t explain why I thought of it or how it came to be. But I feel comforted by it in some strange way.
"The circle of life will go on with or without me. Some people tend to think they are the centre of the universe and all important. Others think they don’t matter at all and no one would care if they lived or if they died. I tend to think that there is a balance in almost everything. We are all the most important things in the universe- after all, Jewish thought says that if you save one life you have saved the world. And it is also true that the world will go on without us and that is a good thing. Everything is important or nothing is important. I believe everything is."
〰〰〰
THE P.J. LE POOCH SERIES
Magic and enchantment in a Quebec village.
For young readers 8 to 12 years of age.
P.J. le Pooch & the Magic Sketchbook - Book 1
A GIRL & HER DOG ... LET THE MAGIC BEGIN!
"HIGHLY RECOMMENDED." 4/4 STARS (CM: Canadian Review of Materials) 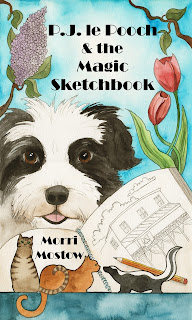 When 11-year-old Millie McTwitter defies her mother’s strict pet prohibition and adopts P.J. le Pooch while her mother is away, something magical begins to happen in Millie’s lonely life. Millie’s drawings in her sketchbook—the last gift from her late father—start to animate on the page, and new people enter her life in unexpected ways. Millie’s mother, vexed by her daughter’s disobedience, threatens to return P.J. to the shelter, refusing to make a final decision about keeping him until his 60-day return guarantee is up. Millie desperately tries to keep P.J. in line ... but dogs will be dogs.
"The story is a good lesson in friendship. Millie wants a dog and will do anything to achieve that goal. ... The story is simple and to the point. There is a Victorian Dog Pageant and Games complete with Victorian costumes, a thief who is uncovered by P.J., two cats named Oedipus and Pussicles who belong to Cassandre and help when a bat moves into Millie’s kitchen. At first, Marc does not want to have P.J. in his yard, but everything works out. The sketchbook adds a bit of mystery as does the thief who steals from the Victorian Dog Pageant and Games. ... Although the characters are female, this book would be enjoyed by both girls and boy and would be an excellent choice for school, public and personal libraries." – CM: Canadian Review of Materials, April 14, 2017, Copyright © the Manitoba Library Association.
"Morri Mostow has written a charming book for young readers about a girl and her dog. A story about friendship and family, it is set lovingly in the beautifully rendered Eastern Townships of Quebec. Its gentle tone will delight readers of all ages." – Carol Matas, author of Cloning Miranda, a sci-fi thriller for YA and middle grades, and Tucson Jo, a 2014 National Jewish Books Awards Finalist
"Lively, modern, quick paced and gently laced with French words. Also, bits of magic appear in just the right places. A charmer." – Nancy Beal, author of The Art of Teaching Art to Children
“A charming ‘girl-meets-dog-and-the-fun-begins’ story set in a delightful town in Quebec. Who wouldn't fall in love with Millie—with her compassion, friendliness, and drive to create an idyllic world in her small town?” – Elle Maxell, author of 24-Carat Murder
Order P.J. le Pooch & the Magic Sketchbook in trade paperback (5"x 8", 126 pages):$17.95 USD. On Amazon.com On Amazon.ca On Chapters-Ingigo
Order P.J. le Pooch & the Magic Sketchbook in Kindle format from Amazon: $8.99 USD.
Order P.J. le Pooch & the Magid Sketchbook in ePub format: $8.99 USD 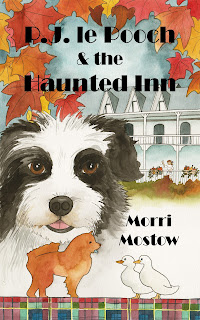 START READING IT NOW
In this second instalment of the P.J. le Pooch series, it is now autumn in the charming Quebec village of Brine Lake, a season of mists and magic in which the mysterious Lola Lamour continues to cast her spell. P.J. le Pooch, now a trusted “store dog” at Coin Héritage, helps 12-year-old Millie McTwitter and her best friend, Cassandre Bédard, solve a crime and discover something surprising when a ghost at the inn asks for their help.
Order P.J. le Pooch & the Haunted Inn in your favourite format:
Trade paperback (5" x 8", 154 pages) for U.S. READERS: $17.95 USD
Trade paperback (5" x 8", 154 pages) for CANADIAN READERS: from Chapters-Indigo
Kindle: $8.99 USD
ePub: $8.99 USD
"In this sequel to P. J. le Pooch & the Magic Sketchbook, readers are reacquainted with 12-year-old Millie, her friend Cassandre and loveable canine P.J., the latter endowed with vast quantities of doggy kindness, intelligence and understanding ... Set in the Eastern townships of Quebec, and with a text, peppered with French phrases, the background to P.J. le Pooch & the Haunted Inn is appealing and authentic. The story moves at a feverish pace with various subplots. ... P.J is also a dog extraordinaire as he ‘works’ at the store comforting the lonely or drawing the girls’ attention to important clues. However, they all focus on doing the right thing and are resourceful with plenty of initiative. The story goes along at a fast clip and is hard to put down. P.J. le Pooch & the Haunted Inn will be a popular read and is recommended for public, school and individual libraries." –CM:Review of Materials Volume XXV, Issues 6, October 12, 2018
〰〰〰
A CHAPTER BOOK FOR CHILDREN 8 TO 12 YEARS OF AGE
A nostalgic tale for middle grades 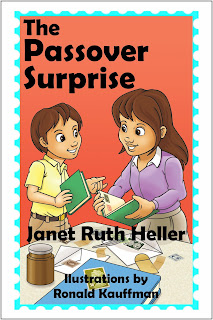