Inspired by the Life of British Novelist Malcolm Lowry 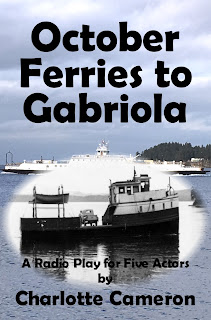 October Ferries to Gabriola is inspired by the life of the notorious British novelist, Malcolm Lowry, author of the 20th century masterpiece, Under the Volcano. Playwright Charlotte Cameron mixes fact and fiction, moving back and forth in time from 1946 to the present day, juxtaposing the lives of Lowry and his second wife, Margerie, with the plight of a contemporary couple. Both couples come to Gabriola Island, British Columbia, seeking refuge, a place to live, write and love, a place of redemption and hope, creativity and rebirth. Both couples are dealing with similar troubles: alcoholism, tragedy and homelessness, hopelessness, guilt and angst. In this powerful drama, Cameron raises a host of existential questions and explores our endless quest for a paradise on earth.
"Playwright Charlotte Cameron has taken Malcolm Lowry’s unfinished novel, October Ferry to Gabriola, a barely fictional account of his and his second wife’s visit to the island, as a theme for his pursuit of an ideal place both for creativity and redemption. She cleverly overlaps Lowry’s story with that of a similar, but contemporary couple—both alcoholic husbands with a guilt in their past and desperately supportive wives. Cameron’s alternative tellings of the two couples’ search comes to a final climax as their four voices almost over-layer. Her brilliant dialogue, as in all good dramas, raises questions; questions about possible redemption and this never-ending quest of ours for Paradise on Earth."—Naomi Beth Wakan, Inaugural Poet Laureate of Nanaimo and author of On the Arts
"While mixing fact and fiction, Charlotte Cameron concurrently spins the wheel of time backward to 1946 and forward to the present day. In this way, she deftly highlights Malcolm and Margerie Lowry’s dream of finding sanctuary and renewal on Gabriola Island while simultaneously illuminating the plight of a similar contemporary couple. Themes such as alcoholism, angst, eviction and homelessness, guilt, hope, and love reverberate throughout this provocative drama."—Sheryl Salloum, author of Malcolm Lowry: Vancouver Days
GET OCTOBER FERRIES TO GABRIOLA IN TRADE PAPERBACK (92 pages): $14.95 CDN
GET OCTOBER FERRIES TO GABRIOLA IN YOUR FAVOURITE eBOOK FORMAT: $8.99 USD
OR, IN KINDLE FORMAT FROM AMAZON.COM: $8.99 USD OR AMAZON.CA: $8.99 CDN
The Story Behind the Play
In 2005, Charlotte and her husband moved from Edmonton, Alberta, to Gabriola Island, BC, where she became fascinated by the life of Malcolm Lowry, the famous author of Under the Volcano. Everywhere she went on the island, she encountered copies of Lowry’s novel, October Ferry to Gabriola, and got bitten by a bug to tell a little-known story, that of the visit of Malcolm and Margerie Lowry to Gabriola in the fall of 1946.
Cameron identified with the Lowrys’ search to find a home where they could live, love and write. She invented a contemporary couple whose lives mirrored the lives of Margerie and Malcolm and juxtaposed the stories of the two couples in her play. October Ferries to Gabriola was first performed as a reading at The Roxy Theatre on Gabriola in 2009, followed by another reading in 2011 at the 7th Annual Poetry Gabriola Festival. In 2013, October Ferries to Gabriola was again presented as a reading at the 2013 Conference, Island Studies: West Coast & Beyond at The Haven, on Gabriola.
In October 2016, the final and published version of the play was performed twice, to sold-out houses, at Surf Lodge (formerly Anderson Lodge), where the Lowyrs had stayed in 1946. These performances were part an organized 70th anniversary celebration of the Lowrys' visit to Gabriola.
〰〰〰
A One-Act Play Inspired by the Life of a WWI Cree Hero and Running Warrior 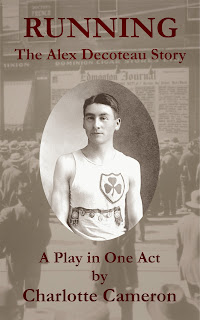 Attention Teachers: Appropriate for Grades 5 and up.
CLICK HERE TO DOWNLOAD YOUR FREE STUDY GUIDE TO RUNNING
“Meticulously researched, this play brings Alex Decoteau—the man, his life, his death— before us. A man of ability, ambition, and integrity. At root: a true warrior, and one who was ultimately sacrificed on the altar of futile tactics.” —Major (Retired) David Haas, CD, rmc
“Charlotte Cameron touches on major issues which drive us now: race, gender, family, colonialism, Canadian identity, and the horrors of war. Cameron's juxtaposition of actual and imagined words and events, and her introduction of significant mundane objects – a pencil box, a policeman's cap, a watch – inspire our affection for Alex and move us to tears as he runs from the North Saskatchewan River floods to the mud and blood of Passchendaele.” —Phyllis Reeve, contributing editor to The Dorchester Review

Running: the Alex Decoteau Story tells the tale of a real Cree hero, brought to life in this moving one-act play by Charlotte Cameron. In 1911, in Edmonton, Alberta, Decoteau became Canada’s first aboriginal police officer, famous for chasing down speeding vehicles on foot to ticket them! A champion runner and popular figure, he raced for Canada at the 1912 Olympics in Stockholm. He fought for Canada in World War I and was killed, in 1917, while running a message at the Battle of Passchendaele. He was only 29 years old.

The book includes an historical note and archival photographs to provide background to the story. A fascinating introduction explains the origins of the play, its various versions, and the Alex Decoteau Run, which brought this aboriginal role model to the attention of many hundreds of Edmonton school children over the 10 years that the event was held.

"A role model for Aboriginal youth..."
The title of this play has a double meaning. Alex Decoteau was not only a champion foot racer, he served in the army as a regimental runner. In an era before radio existed for infantry battalion communications, and with telephone lines being susceptible to being cut or tapped into, messages between the levels of command were carried by hand—the duty of a soldier called a “runner.” This was hazardous duty in the extreme, and performing it is how Alex Decoteau died.

He fell nearly a hundred years ago, in the cauldron of the Battle of Passchendaele, the worst of Field Marshal Haig’s repeated failing offensives along the Western Front in Belgium and France. He lies nearby, at the Passchendaele New British Cemetery which contains about 2,101 graves and commemorations from the late 1917 fighting in the area. At least he has a known grave. Only a quarter of the bodies in that cemetery are identified. Visitors to Canada’s cemeteries in northwestern Europe are often jolted by how many of the gravestones do not also display the name of the warrior beneath. Even so—their bodies were found. Many others who died were buried hastily and their graves lost. Still more vanished in horrifying explosions which buried them beyond location, or left little or nothing to be found.

At the time of his enlistment on April 24, 1916, at age 28, Alex Decoteau was already a man of public accomplishment: an Aboriginal at a time when racist sentiment in Western Canada was strong and open, he had joined the Edmonton City Police and risen to the rank of Sergeant. A top calibre long distance runner, he had won a place on Canada’s team for the 1912 Olympics in Stockholm. It may be added that his army enlistment was voluntary—Canada did not have conscription at the time, and when it did later his police status would have exempted him.

Playwright Charlotte Cameron brings out that Alex would have felt internal pressure to join up—for he came from a warrior tradition. But there were external psychological pressures on younger men to enlist, among them the practice Cameron mentions of women presenting younger men in civilian clothes with a white feather denoting cowardice. I once read that young officers in a London office of the British secret service, who went about their duties in civilian attire, kept on a mantelpiece a collection of white feathers they had been given in the streets. That noxious stigmatizing seems to have died out by the Second World War, but I have personally talked with two men who were turned down on medical grounds for military service in that conflict, yet received public slagging despite the nature of their physical defects being readily apparent. Their pain in talking about their humiliating experiences was readily apparent decades later.

I met Charlotte Cameron in early 2001, when she was getting Running ready for the Edmonton International Fringe Theatre Festival, and contacted The Loyal Edmonton Regiment Military Museum. As it happened she was after a particular First World War song to be sung in the show, and as it happened I was able to sing it for her. That was the beginning of occasional collaboration over the years since. One thing quickly became abundantly clear—Charlotte wanted to get the military details right. Plays depict truth, they cannot recite it in detail. The important thing is for the playwright to understand what condensations and abstractions are necessary for the theatrical performance, but to keep the play true. Charlotte’s play Running meets that standard, and it is because she took the time to learn what Alex Decoteau’s wartime experience really involved.

I was unable to take in the 2001 production, but I made it to the first 2004 presentation. Though I knew the story, I was moved and enchanted. I was accustomed to dealing with lists of names where bits of a soldier’s wartime experience emerged, but for most of them little or nothing was known of their life before the army. Now I encountered the depiction of a real person, a complex individual of considerable achievement. And one who was ultimately sacrificed on the altar of futile tactics. For me this was much more compelling than the repetitive plays of social significance, coming of age dramas, etc. that dominate much of the contemporary theatre scene. Want grinding realism? Try the battle scenes at the end of this play!

But plays are meant to be staged, performed by living actors. Reading the script cannot convey to the reader the richness of a well-executed theatrical performance. This book, however, is much more than a script. It gives historical details of Alex Decoteau—the person, the athlete, the police officer, and the soldier. And it gives an idea of the process through which his memory was preserved and made available to future generations.

Four and a half decades ago my military duties had me from time to time perusing the pages of The Times of London for relevant articles. On those occasions I would range more widely through the newspaper from purely personal interest. I was struck by the many, many personal notices that commenced, “In proud and loving memory …” Then a name. A date just over a half century earlier in the First World War. Sometimes a few details. That answered the bitter challenge thrown out by poet (and winner of the Military Cross as a young infantry officer in that conflict) Siegfried Sassoon: “Who will remember … the unheroic Dead who fed the guns.” Many of their families do. And so it was with Alex Decoteau. You can get the feel of that from Charlotte Cameron’s book, and a sense of how the process made more details about him available when later generations began seeing him as a role model for Aboriginal youth.

The play ends with Canadian Prime Minister Sir Robert Borden’s blunt threat to his British counterpart David Lloyd George, to withhold Canadian troops if there was any repetition of the futile butchery of Passchendaele. The passage is quoted from Borden’s nephew, who witnessed the conversation, and—as a prominent Toronto lawyer years later—repeated it. That battle featured the bloodiest 24 hours in the history of the 49th Battalion (Edmonton Regiment) and its successor The Loyal Edmonton Regiment. It was then that Alex Decoteau died. This book will tell you how that happened, and what manner of man he was. —Major (Retired) David Haas, CD, rmc