IS THERE A SOLID FOUNDATION FOR THE ETHICAL CONCEPT OF THE GOOD? 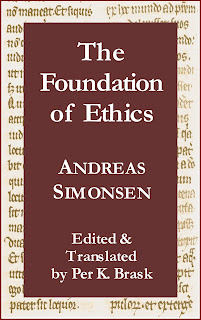 This eclectic, thought-provoking work takes the reader on a fascinating journey through Western philosophy and scientific theory – to the author’s unique adaptation of Niels Bohr’s theory of “complementarity” to ethics. 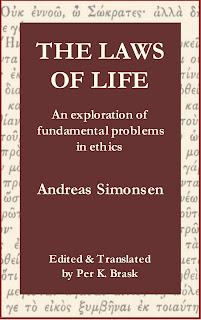 Danish-Jewish thinker Andreas Simonsen explores what he considers the three most fundamental problems in ethics: free will versus determinism, happiness versus duty, and humanism versus humility.

“These problems have been pondered throughout history, often with great perspicacity and wit. However, every generation must take its own position on them so that new experiences are included in our understanding of life, not only directly but also indirectly through changing interpretations and practices of past wisdom. Just as wisdom cannot simply be adopted, it cannot simply be dismissed. … Fruitful independence does not consist in starting from scratch.”

Simonsen attempts to untangle the inevitable contradictions “attached to everything human and conditioned by a basic paradoxical duality in our essence and existence. … 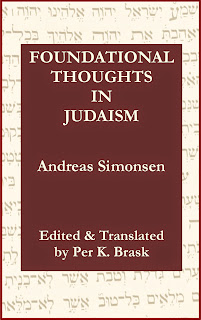 "I wish had known about this book when I converted to Judaism." — Per K. Brask, Editor & Translator

What does Judaism say about free will, suffering, good and evil, sin, responsibility, righteousness?

Danish thinker Andreas Simonsen explains where Judaism stands on these and other complex moral issues, puts them into historical context and discusses their relevance to our lives today, while tackling the contradictions, confusions and paradoxes inherent in Judaism’s fundamental tenets. He also compares Judaism’s teachings to those of Christianity, humanism and selected Western philosophers, both classical and modern.

Praise for Foundational Thoughts in Judaism
"An excellent introduction to Jewish thought for those interested in the study of Judaism
or for those who wish to deepen their own Jewish faith in light of modern criticism of religion in general and Judaism in particular...This book flows gracefully as the various texts help to illuminate the theme and the reader is adequately prepared to engage the text through Simonsen's (and Brask’s) clear prose. It is a testament to the range of Simonsen’s knowledge that the Talmud and the Bible can be interwoven so seamlessly." — Dr. Jane Barter Moulaison, Chair, Department of Religion and Culture, The University of Winnipeg.
〰〰〰
Q & A WITH PER K. BRASK, EDITOR & TRANSLATOR
OF FOUNDATIONAL THOUGHTS IN JUDAISM BY ANDREAS SIMONSEN
Q.: How did you discover Andreas Simonsen’s book?

A.: In February 2012, I was visiting my father in Denmark and a few days before I left to go back home to Canada I happened to listen to a program on the radio. Marianne Olsen was being interviewed about a thinker, Andreas Simonsen (1923-1991). Marianne Olsen is the head of a foundation that promotes Simonsen’s work and she has edited two books of his letters and journals. I had never heard of him, but I found the interview fascinating. Back in Winnipeg, I contacted Marianne Olsen and asked her how I could get hold of some of Simonsen’s books and she sent me a good selection, among them Foundational Thoughts in Judaism. None of his books had ever been translated into English. I read them all and fell in love with his book on Judaism and asked permission to translate the book. Marianne agreed and in the process we have established a close friendship. She in turn has translated some of my poems into Danish and we have corresponded at great deal about Simonsen.

Q.: What particularly intrigued you about his work?

A.: For years I’ve been attracted to Niels Bohr’s notion of complementarity and it turned out that Simonsen was deeply involved in this kind of thinking. In fact, while he lived as a refugee in Sweden (from October 1943, when the Germans began rounding up Danish Jews until May 1945, when Denmark was liberated), he lodged with one of Bohr’s close collaborators, the physicist Oskar Klein, who was a first cousin of Simonsen’s mother. Since Bohr’s notion of complementarity was applied mainly in physics to such phenomena as the particle and wave descriptions of light in which both are necessary for a fuller understanding, Simonsen coined the term disconjunction for analogous situations in ethics; i.e., for situations that require descriptions that are seemingly mutually exclusive but are equally necessary. For instance, bravery without level-headed assessment can easily become recklessness, and levelheadedness without bravery can turn into inaction. In other words, there are relationships among values that may seem contradictory but are in fact mutually dependent.

Q.: Who was Andreas Simonsen?

A.: Andreas Simonsen was born in 1923. His father, Rudolph Simonsen, was a composer and the director of the Royal Danish Music Conservatory and his mother, Kåthe (née Löwenthal), was a painter. Andreas Simonsen matriculated at the University of Copenhagen in 1941 and began studying Classics and German, but he had to suspend his studies in 1943 when the occupying Germans began rounding up Jews. He continued his studies when he returned to Denmark (as part of the Danish Brigade) in 1945 and completed them in 1953. He then began teaching at Zahles, a famous Danish gymnasium (high school, lycée), and at the University of Copenhagen. He married Else Marie Krogh (1914-1989) in 1956. He suffered from severe and, at times, debilitating depressions. Despite this, he published some twenty books before the illness overpowered him in 1991.

Q.: Why do you think Foundational Thoughts in Judaism is an important work?

A.: I enjoy the way Simonsen unpacks some seeming contradictions in Judaism; e.g., the notion of God as Lord and God as Father, and the manner in which he explains how Judaism’s approach to monotheism leads to love of one’s fellows. And very importantly, he makes clear how necessary the insights of Judaism are for us today; that its form of gratitude and awe can inspire right behavior, better living.

Q.: Who should read Foundational Thoughts in Judaism?

A.: Anyone with an interest in ethics, in the relationship between ethics and religion (whether believers or non-believers); anyone curious about Judaism, of course; theologians and students of religion.

During my studies in preparation for conversion to Judaism, I had the great pleasure of being helped by a number of very fine rabbis, but I wish I would have known of this book at some point along the way. My mind happens to be of a slight philosophical bent and Simonsen addresses many of my questions in a way I find satisfying. Simonsen teases out connections and addresses issues in a contemporary context as well as in dialogue with modern Christianity and existentialism.